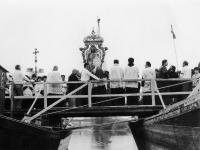 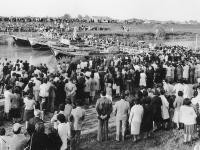 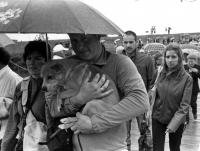 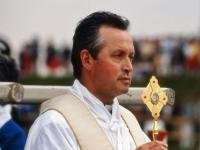 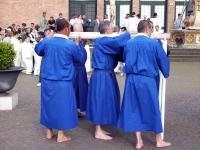 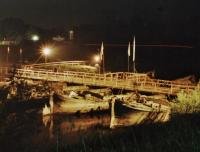 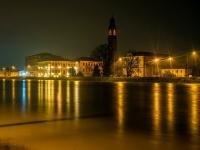 ❝The terrible plague that struck the river town of Pontelongo in 1676 is remembered each year in one of the most popular historical processions in Paduan territory, the Procession of the Vow. To mark the occasion, the opposing river banks are united by means of a specially set up wooden bridge which is crossed by all the participants, giving the event a spectacular liquid backdrop. ❞

One of the most deeply felt religious rites in Paduan territory has been celebrated at Pontelongo since the seventeenth century: the Procession of the Vow of the Virgin. Pontelongo stands on both banks of the Bacchiglione, on the river section known as the Pontelongo Canal, and is a town historically divided in two by water. The procession goes back to the year 1676, when the town asked to be rid of the plague that scourged the town at the time. Since then, on the first Sunday in May, this act of faith is renewed in an itinerant religious ceremony which has water at its centre.
After Mass in the parish church of S. Andrea, a solemn procession takes place in the afternoon, which moves through the streets and then crosses the Bacchiglione on a bridge that is specially set up for the event. It follows an effigy of the Virgin, held by barefoot carriers, to the river, where a solemn benediction of the water takes place. The symbolism of this act stems from the healing force of the element water, banishing evil and uniting the two rival (in the original sense, meaning "situated on opposite banks") communities whose friendship was inevitably compromised during the tragic time.
The ceremony is a unique opportunity to discover the cultural and environmental characteristics of the town and its historical waterway, the last part of the Bacchiglione on its way to the sea. The Pontelongo Canal, traditionally dedicated to commercial navigation between the Adriatic, the Venice Lagoon and the inland, is today the perfect setting for river excursions and cycle tourism, on the trail of the much used ancient Salt and Sugar Routes. Tourist navigation is guaranteed by a service for which booking is necessary, and goes from Pontelongo to Chioggia via the historical Benedictine Court of Correzzola.

By train: the town centre of Pontelongo has a station on the Venezia-Adria railway line.
By car: Motorway A13 (Bologna-Padova) exit at “Monselice”, proceed along the SP5 and SR104 roads following signs to Chioggia, then turn towards Pontelongo near Villa del Bosco. Travelling from the SS309 road (Romea), turn along the SR105 road towards Cavarzere near Passo della Fogolana and, after a few kilometres, join the SR104 road towards Monselice; then, near Villa del Bosco, turn right towards Pontelongo.

Where to eat: in Pontelongo town centre we recommend the “Ristorante Lazzaro 1915”, the “Pizzeria Trattoria La Casa Bianca” (Vicolo della Pace 51, Pontelongo; tel. 049 9776332), and the “Trattoria Pizzeria “Al Cacciatore”.
Where to stay: in Pontelongo we recommend the “Albergo Trieste” and, in the Terranova part, the “Country House” and the “Villa Barchessa Contarini”. In nearby Correzzola we suggest the “Hotel La Corte”, situated in the splendid medieval setting of the ancient Benedictine Court and, in Villa del Bosco, the “Agriturismo Fondo San Benedetto”.
Information about the event and river boat excursions: Pro Loco Pontelongo