From Padua to Battaglia Terme in the Euganean Hills, from Chioggia to the fortified town of Este… A journey through the hidden water civilization that marks the inland waterways of the Serenissima Republic of Venice The cisterns of Venice

A heritage almost invisible, but which has allowed the city of Venice to survive for centuries in islands where no fresh water can be found. How? 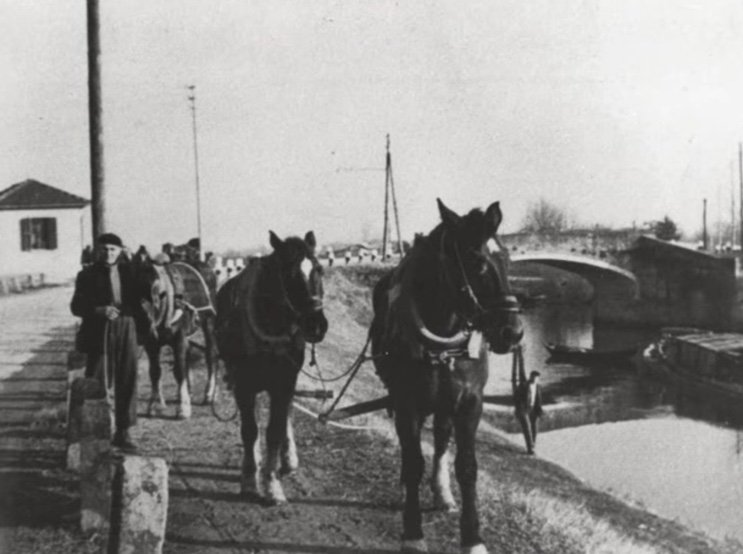 A dense network of natural and artificial waterways has always characterized the life of the Venetian hinterland, as this presentation on inland navigation evokes Art and science in a thirsty world

“Art and Science in a Thirsty World” is the video curated by Gail Holst Warhaft and Cayenna Ponchione, edited by Cornell University, as part of the exhibition "Visualizing Water Worlds" (Venice EXPO 2015) In the pioneer art work of Maria Cristina Finucci, the Garbage Patch - one of the most serious pollution phenomena on the planet - represents the enormous quantity of plastic waste that ends up in the sea and the oceans every day The Water Court of Valencia (Spain), of Arab origins, was established to settle water disputes between Andalusian irrigation communities. Today is listed is listed by UNESCO as a unique intangible water heritage The ancient world of river navigation in the “immersive” video installation made for Venice EXPO in 2015, with unpublished videos and shots of the documentary film "Gente del Po" (People of the Po River), by the master Antonioni Alvise Zorzi, film maker and novelist, offspring of a noble family of Venetian Doges, traces the genesis of the city and the subsequent development of the Venetian Republic, until the formation of the "Stato da Mar" (Sea State) The historian Gherardo Ortalli recalls the slow but unstoppable expansion of Venice from the Middle Ages, with the island of Rialto in the center, and its seven centuries-old dominion over trade and traffic in the Mediterranean Through an amusing anecdote about the Beatles, the archaeologist Tito Canal tells how the exceptional discovery of ancient Roman buildings and villas, like a submerged Atlantis, took place in the Venice lagoon The writer Paolo Barbaro describes the construction techniques of the ancient Venetian palaces, which used wood from the Alpine mountains, transported to the lagoon by rafts on the Piave river The Venetian rowing associations are today a key player to keep alive the traditions of the “voga alla veneta” and the use of historical wooden boats. Both are crucial aspects to guarantee a smart fruition of waterways The last ferryman of the Acquanera

When bridges didn't exist... the "passo barca" was indispensable for transporting people and things from one side of the river to the other. Enrico Questioni, the last heir of a ferryman family, recalls how an ancient ferry used to work The last boatman of Battaglia

An unimaginable world for those who have never seen it… Riccardo Cappellozza, "the last boatman", tells us about the flourishing river trade that took place between the Po basin and the historic navigable waterways of the Serenissima The epic of boatmen, between poetry and reality

"I barcàri de Bataja": in these evocative verses of the dialectal poem of Luciano Rosada, played by Franco Sandon, the dreams and labors of generations of boatmen from the historical waterways’ junction of Battaglia are relived The Venice champion of "Vogalonga"

"The true identity of Venice is the oar: a story not written in any book". With these words, Gloria Rogliani, a well-known Venetian rowing champion, tells the experience that anyone can live to discover a genuine Venice The secrets of the "Squero" and the gondolas

Germano da Preda tells some of the secrets of the gondola and artistic “forcole” (oarlocks). At the Arzanà, a small but not-to-be-missed museum set up at a historic “squero” (Venice boatyard), unique wooden boats are preserved The last boatmen of the Sile river

From Treviso to Venice along the placid and silent Sile: Glauco Stefanato, heir of a historic dynasty of boatmen, tells stories and anecdotes of men and waters, between the the Venice Lagoon and the longest resurgence river in Italy Venice and the art of making the “Fòrcola”

Even today, in one of the last craft shops of this kind in town, Saverio Pastor hands down knowledge and secrets jealously transmitted from generations: a boating knowledge that has made Venice a unique city in the world