Adria and its riviera 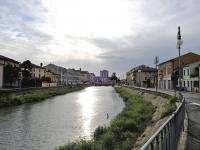 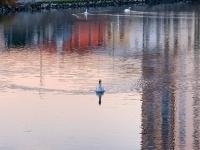 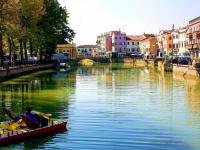 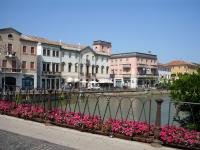 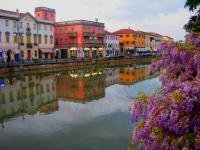 ❝The city of Adria, located in a strategic position between the Adige river, the Po river and the sea, played a key role in the complex network of trading traffic that connected the Po hinterland with the Mediterranean and Greco-Roman worlds through a complex river navigation system. The historic port of Adria was so important economically and culturally that it gave its name to the sea that led to it: the Adriatic.❞

The origins of Adria, whose first written records date back to the 6th century BC, are intertwined with Greek mythology. This culture has handed down to us episodes and details that are unique to the Polesine territory, portraying, in particular, the great river, the Po (then known as Eridanus). In one of these myths it is said that the ship of Diomedes, companion of Ulysses, encountered a storm on the high seas during his journey back to Ithaca and was pushed up to the beach of Aetria (meaning serene), where the ancient river Eridanus flowed. According to another myth, as a consequence of Phaethon drowning in the Eridanus river when he fell from the sun chariot he had stolen from his father Apollo, the Heliades wept their tears on the river. And as their tears came into contact with the water, they magically turned into drops of amber. This precious fossil resin from the Baltic Sea was subject to intense trading in the Greek world; and Adria, located at the mouth of the Eridanus, was, at the time, in a strategic position for trading between north and south Europe. The city of Adria was at the centre of the Amber road. The Eridanus is, therefore, a mythological river, directly connected to the underworld, as it is linked to the death of Phaethon, who fell into and drowned, but it also hands down important clues about the navigation routes of the ancient Mediterranean world and their connections with the whole of Continental Europe.
With the passage of Etruscans, Greeks and Romans, the city played a key role for centuries in the network of traffic involving the Adriatic and the Po hinterland, with trade exchanges that included pottery and furnishings, foodstuffs (cereals, oils, wines) and, in addition to amber, precious materials such as tin and silver. An understanding of the history of the city are aided by the most significant finds, including a Roman milestone: a single block of sandstone (preserved in the National Archaeological Museum), with an inscription commemorating how Adria was on the path of the Via Popilia-Annia, the Roman road that connected Rimini to Ravenna and Aquileia. At that time Adria boasted a port holding a fleet of 50 ships ready to sail the whole of the Adriatic.
While in the Middle Ages there were no particular mentions of Adria, partly because of floods that radically impacted the territory, the same cannot be said of the period of the Serenissima government, during which the current urban structure was defined. The Venetian influence can be seen in the noble palaces, the long and narrow alleys of the historic centre and the rivieras on the Canalbianco. Its expression can be most clearly seen in Piazza Oberdan, known as the “formentòn”, because it was once the place where grains were traded. The Cannaregio district still retains a typically maritime style. The rivieras of Adria stretch out on the banks of an internal branch of the Canalbianco, which runs further south and is part of the important Fissero-Tartaro-Canalbianco waterway that connects Mantua to the Adriatic. The rivieras constituted the fulcrum of city trade and were used as docks by the numerous ships transporting goods (above all grains, flour, wood and coal) between Adria, the Delta and the Venetian Lagoon. It is no coincidence that the Municipal Theatre, the cradle of art in Adria, also appears on the banks: an imposing and elegant building built according to the design of the architect Giambattista Scarpari and inaugurated in 1935.

By train: from Adria railway station take Viale Umberto Maddalena, cross the roundabout and go on along Viale Vescovado, then continue to Corso Vittorio Emanuele II.
By car: from the highway exit Boara-Rovigo Nord (Autostrada A13) take Via dell'Artigianato and Via dello Sport to SP1 in Boara Pisani, then follow Tangenziale Est/SS16 and SR443 to Via Peschiera in Adria; then continue along Via Peschiera to Via Alberto Mario to reach the city centre.
From SS309 Romea, follow the signs to Adria, taking SP45 coming from Venice or SP46 coming from Ravenna.

Immersed among liquid memories and mysterious legends: the oasis of nature that evokes Greek mythology