CHEMICAL AND ANOMALIES OF WATER

If we observe some ice floating on water, it will seem to us just a natural phenomenon, but have we ever stopped to think what would happen if ice would be heavier than water? It would sink deep down seas and oceans, lakes and rivers, it would fill them gradually causing the end of many known life forms. Even climate would suffer catastrophic consequences. In other words, life as we know it on planet Earth wouldn’t be possible. To tell the truth, from a strictly chemical point of view, the behavior of water in this case is quite strange. Actually, it’s a real “anomaly”: no known substance chemically behaves like this! Normally when a liquid cools down (thus decreasing its energy and the movement of its constituent molecules) it reduces its volume until it turns solid, reaching then a density and a weight bigger than the same substance in liquid form and able to make it sink in the liquid itself. In other words, if water would behave like any other substance, according to the normal theory of liquids, life on Earth would be a lot different compared from how we know it!

But more are the bizarre behaviors of water. For example, it is able to win the gravitational force and climb up small diameter pipes called capillaries. The capillarity forces play an important role, for example, in the ascension of water in plants. Moreover, water is the sole known substance that, pressed by temperatures and environmental pressure, is present on Earth in all three physical states of matter: solid, liquid and gaseous. Water is able to retain heat more than any other substance, thanks to its high thermal capacity or specific heat. For this reason, it can convey heat in earth’s movement and release it gradually, mitigating climate and making Earth hospitable for human presence. Water also has a high surface tension, among the highest among known liquids: it is possible to see a metallic paperclip floating on water or an insect bouncing. This explains the formation of water droplets, their dimension and the fact that they can lean against different types of surfaces without spreading themselves into a very thin veil. This characteristic is, for example, very important for the cellular physiology. Thanks to its extraordinary solvent capacities, water can solubilise a lot of solid, liquid and gaseous substances. In this way you can wash things and wash yourself: it wouldn’t have been possible otherwise to imagine the concept of hygiene. Finally we know that water turns solid at 0° centigrade (and at a pressure atmosphere) but reaches its higher density at 4° centigrade: it’s because of this anomaly that ice floats. At 4° centigrade the so-called “anomaly point” is registered: water presents particular characteristics of fluidity that make an accurate observer like Schauberger think that, at this temperature, liquid presents “higher qualities”. In fact, it flows at full power, so fishes can rise to the surface by taking advantage of what the Austrian scientist calls “flow-contrary energy fields” [cfr. Schauberger].

Water’s anomalous behaviors do not finish here. Others exist that would request deep knowledge of chemistry and for this reason they cannot be included in this study.13* In the light of the examples given above, it is clear that water is and remains a substance: absolutely unique for the diversities that it shows compared to any other known substance; strange for its anomalous behavior and mysterious because still elusive. Felix Franks, an expert physics and chemistry researcher, observed that “among all the known liquids, water is probably the most studied and less understood”. A mystery that should make us think about the fact that this strange behavior is what makes life possible.

Such a uniqueness would require more attention than what we do today to safeguard the quality of all waters. In other words, more civility is needed.

THE MEMORY OF WATER IN THE QUANTUM PHYSICS

If chemistry looks at matter, physics observes the phenomena and forces that interact in it.
Therefore, if instead of looking at water as chemists, we adopt the look of physician, we find out many other interesting phenomena that modern physics (quantum physics) is gradually revealing.
One in particular deserves to be mentioned.
It was by chance that, after a wrong experiment, scientist Jacques Benveniste noticed an astonishing behavior in water.
Observing the reaction of the molecules that make up the water, Benveniste came to the sensational conclusion that water has a “memory” able to receive, hold and give back information.
It was 1988 when his first article was published, rising incredulity, opposition and also a strong refuse by the scientist community.
Since then, anyway, other physicians have deepen and confirmed this theory refused at first by other scientists.
That same year two Italian physicians, Del Giudice e Preparata (*), compared the behavior of water to electric dipoles, that’s to say antennae that transmit electromagnetic waves at specific frequencies, able to induce in other molecules synchronous and coordinated movements.
In other words, when the water molecules oscillate “in phase” and come together forming a unique group of molecules, they create (as they are a singular super-molecule) a coherent system, called “domain of coherence”.
In 2011 a famous physics magazine, the Journal of Physic, published a study made by a team of Italian-french researchers (among which the Nobel prize for medicine Luc Montagnier) called Dna, waves and water2 where some interesting experiments are made known (**).  Scientists have put a segment of Dna in aqueous solutions and, after further dilutions, Dna started to transmit electromagnetic signals at low-frequency.
These frequencies were kept “in memory” by aqueous solutions.
The electromagnetic signal, in fact, made all molecules vibrate together at the same frequency (domains of coherence). The amplified signal was then recorded by a computer. Montagnier, Del Giudice and Vitiello have spoken of water “informed” by an electromagnetic signal, which is received, amplified and transmitted just as an antenna does.
In a laboratory on the other side of the world, to which the recording was sent, the reproduction of the same recorded signal was subjected to an aqueous solution, with the surprising result of being generated in the aqueous solution the same structure of the original DNA segment.

(*) Emilio Del Giudice (1940-2014) Italian scientist of international renown, he has worked by the National Institute of Nuclear Physics in Milan; Giuliano Preparata (1942-2000) Italian physician, he has taught at the most prestigious American universities. 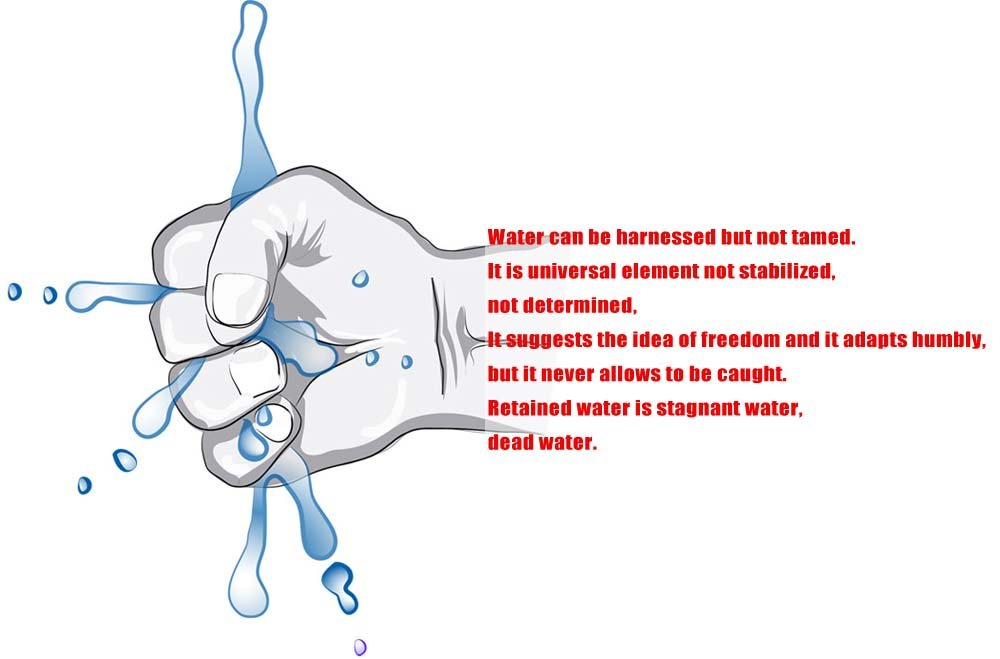 The invisible shape of water: the icosahedron

In Timeo, Plato associates to each basic element (fire, air, earth and water) the shape of a solid.
For the atoms of water, he had imagined the geometric shape of the icosahedron, whose surface is made by twenty triangular faces.

It took more than two thousand years to give A. Lavoisier (1783), who can be considered the first real chemist, the possibility do demonstrate that water is not a pure substance but a composed molecule.
Thanks to chemistry we know, in fact, that the molecule of water is composed by two atoms of hydrogen (H) and one of oxygen (O), that give the molecule (H2O) an angle of 104,5°.

Nevertheless, the reality of water is definitely more complex, because it cannot be treated as a singular molecule.
The atom of oxygen, in fact, has two other pairs of electrons that function as two other vertices, giving water the characteristic shape of a tetrahedron.
The atom of oxygen, negatively loaded and hydrogen, positively loaded, create a polar molecule with a big force of attraction in comparison to the nearby molecules, generating a connection called “hydrogen bridge”.

This particular connection can be considered without any doubt another anomaly of the water molecules, thanks to which it is possible to justify many strange behaviors of water.
A model in the structure of liquid water proposed in 1998 and confirmed in 2001 (x-ray viewed) assumes that a water molecule joins other nearby molecules to combine a cluster composed by 5 water molecules (a single molecule forms 4 hydrogen bridges then joins other four molecules); four molecules form a tetramer from whom will derive octamers.
The combination process goes on until it reaches the geometric shape of the icosahedron characterized by 280 molecules (and a diameter of 30 angstrom)! (*)

The weirdnesses of solid water

When water turns solid, it assumes an unmistakable configuration with hexagonal symmetry.
In 1931 William Bentley published in a book called Snow Crystals 6.000 microphotographs about snow diversity.
No other known substance crystallizes in so many different ways!
Equally extraordinary is the fact that ice, subjected to different values of pressure, gives rise to at least twelve different crystalline structures.
And there’s no scientific explanation of why the flat star ice-crystal remains confined within 2 dimensions instead of three!
Japanese researcher Masaru Emoto, after meeting bio-chemist Lee H. Lorenzen, has developed a particular technique for microscope observing and photographing crystals forming during water’s freeze.
In this way he has photographed the water of rivers, aqueducts and sewers of the big cities all around the world.
Surprisingly he noticed that crystals deriving from the solidification of water were very different among them according to the conditions of the water itself, therefore considering its pollution level and typology.
The images of the polluted water crystals showed, in fact, a definitely ugly aspect or, as Masaru Emoto said, less harmonious compared to the perfect geometrical structures of the unspoiled water crystals (picked up, for example, in mountain torrents or glaciers) that look like candid snowflakes with perfect hexagonal shapes.
Therefore, even Emoto’s research supports the thesis according to which water keeps the memory of the substances with which it came into contact and is not indifferent to the places it passes through and the treatments it undergoes.

Schauberger, a clever observer of water

Viktor Schauberger (1885-1958) was also called “the magician of water” because, more than a scientist, he was a clever observer of the precious liquid element. He carried out several researches for Austrian prince Adolf von Schaumburg-Lippe, reaching inspiring conclusions. He observed, in fact, that water generates shapes and forces; that it flows more intensively during cold days and, even better, overnight with the full moon. Moreover, he assumed that during the day water is “lazy”. He noticed that watercourses prefer curvilinear trajectories and the shade of vegetation. Thus he theorized the cycloid motions of water. These studies gave him the possibility, during winter 1918, along a river situated in an absolutely inaccessible region, to bring down to valley in one night more than 1.600 m3 of wood. A challenge considered impossible until then by the Prince's engineers (Consigli, 2005).
Schauberger believed that it is not possible to understand water just following the logical thought, but it is necessary to develop a “bio-logical” thought. With his refined observations about spiral and cycloid water motions, the scientist assumed theories able to provide interesting answers to otherwise inexplicable phenomena, boosting new further scientific researches.