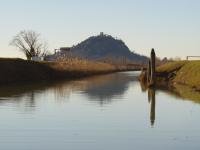 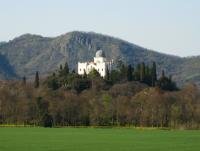 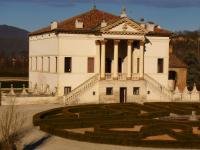 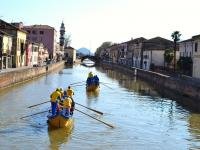 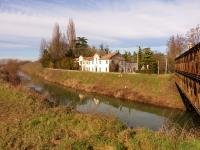 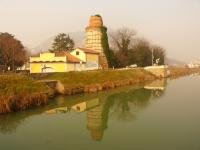 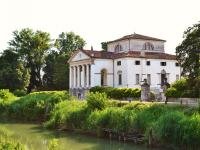 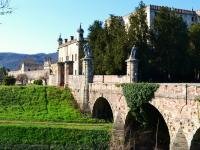 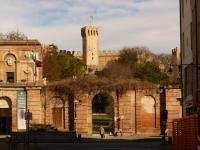 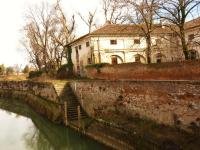 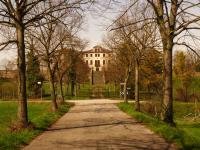 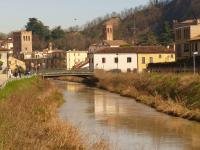 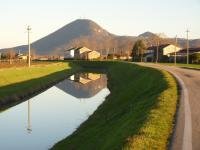 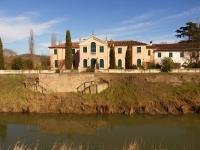 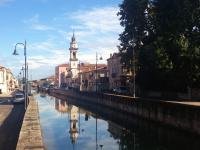 ❝As from medieval times, the Lordships of Padua and Vicenza began carrying out some exceptional works of hydraulic engineering, the artificial navigable canals, used for troops, goods and people. A subsequent flourishing water commerce came into being which was a magnet for the castles, villas, noble mansions, fortified cities and river towns that are so typical of the hills and bordering plains. ❞

The ancient navigable waterways lying between the rural areas of the Euganean Hills and the small, fortified centres, constitute an admirable part of the Paduan landscape. Through feats of hydraulic engineering, celebrated canals were built between the twelfth and the fourteenth centuries, which operated as communication routes for commercial navigation and the transportation of people.
Medieval disputes between the lordships of Padua and Vicenza lie behind the building of the earliest canal, the Bisato Canal. The work of the citizens of Vicenza, it was built in 1139 to cut off rival Paduan access to the Bacchiglione, and allow the Adriatic coast to be reached, bypassing Padua, along the Vigenzone and Pontelongo canals, ending at Chioggia. As a counterattack, the citizens of Padua started on the Piovego Canal (1309), and, immediately after, the Brentella Canal (1314). They did so in order to ensure the necessary volume of water for navigation arriving from the River Brenta, and to create a new connection route with Venice. The Bisato Canal and the Battaglia Canal (also constructed by the Paduans, between 1189 and 1201) meet at the river town of Battaglia Terme, creating one of the most fascinating junctions of Veneto: the Euganean Riviera, mentioned by many travellers, philosophers and men of letters, among whom Francesco Petrarca. Still today, the curious traveller can witness the numerous historical hydraulic works, (bridges, moorings and navigation basins) from the slow and solemn perspective of a boat. And, from the banks, take in views of the hills, towns, villas and architecture from the Medieval and Venetian periods, among which the Castles of Catajo and Monselice.
This complex network of canals assured centuries of prosperity to Padua and the Euganean Hills, using a variety of wooden vessels, known as rascone, padovane, burchielli and burchi. The latter, emblem of river navigation, is the last in a series of traditional vessels. The burchio could reach 35 meters in length and could hold up to 250 tons. It was used for the transportation of people and goods, including trachyte, the grey volcanic stone noted for its anti-slip properties that was used to pave Venice.

By train: Battaglia Terme, the central town of the Euganean Riviera and its canal system, has a convenient station on the Padova-Bologna railway line. Alternatively, the Terme Euganee-Abano-Montegrotto station, 7 km further north, is also served by long-distance trains.
By car: exit the Motorway A13 (Bologna-Padova) at “Terme Euganee” and proceed towards Battaglia Terme.